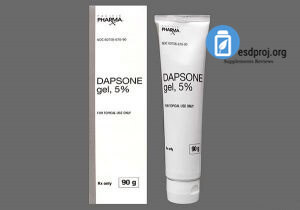 Dapsone is a diamino-dphenyl sulfone, which is an antibacterial agent that is commonly used with clofazimine and rifampicin. There are a number of treatments that use dapsone. . It is used as an antibacterial drug for susceptible cases of leprosy, as well as the primary treatment for Dermatitis herpetiformis and it is also used as a treatment for Pneumocystis pneumonia or PCP and can be combined with pyrimethamine to treat malaria. Dapsone is a white, odorless crystalline powder, insoluble in fixed and vegetable oils and in water. It is taken both topically and orally depending on the treatment.

Skin conditions are not only irritating, they are also embarrassing to have, especially when they are in areas everyone can see. Medication to treat such issues is a necessity for many people, which is why there is always something new on the market. Dapsone is an effective answer that works quickly to produce clear results. Having this relief when it is needed can stop the suffering and bothersome issues when they first appear and give you the chance to control it if it comes back.

Dapsone is an antibacterial agent, similar in effect to those found in the sulfonamide group, although different in structure. Essentially, Dapsone prevents the bacterial synthesis of dihydrofolic acid, which essentially means it inhibits the ability of bacteria to grow which in turn leads to the destruction of the bacteria elements.

However, Dapsone can also treat non-bacterial skin conditions as well. While the reasons are not fully understood, the basic effect is that Dapsone has an anti-inflammatory agent that blocks the myeloperoxidase. This inhibition means that it is effective in a number of treatments for conditions of the skin to even, in theory, the inflammation of neurodegenerative diseases such as Alzheimer’s Disease and even stroke, though studies are continuing along these lines.

The effect that Dapsone has on leprosy was such as some strains developed a resistance. This has led to the introduction of multi-drug therapies that include this medicine and other agents which destroy the resistant leprosy cells.

Dapsone is not a steroid. Yet Dapsone doesn’t generally fit within the known non-steroid anti-inflammation agents (NSAID). Typically, NSAID will block cyclo-oxygenase, but Dapsone does not do this.

While the theories in developing Dapsone had been present since the early part of the 20th century with the work of German chemist Paul Ehrlich, the real breakthrough came in 1932 by Gerhard Domagk who discovered the antibacterial properties of prontosil red. This led to a number of new discoveries that culminated with the creation of Dapsone in 1935 by Ernest Fourneau.

Chemists Fromm and Wittman first synthesized Dapsone in 1908, although the true discovery of what they had accomplished was not know until decades later. The Dinitrodiphenyl sulfide of which Dapsone is the colloquial term was oxidized down to the sulfone in a solution consisting of the following chemicals mixed together;

Adding an alkali to the mix allowed the free base to be obtained. From this, further development of Dapsone continued until its full effect was revealed in the mid-1930s.

When taking any type of medication, it is important to know the dosage so that you do not overdose, something that can be deadly. For Dapsone, you are most likely going to be taking it once daily. Since individual needs differ, you should speak to your doctor and know the dose you have been prescribed. Also remember to follow the directions exactly so that you do not take too much or too little, which can cause serious issues with your health. If a dosage is missed, only take it if you are not nearing the next dosage time. Doubling the Dapsone dosage is dangerous to your health and should not happen.

When not used topically, Dapsone is administered orally in 100mg tablets or sometimes in smaller 25mg tablets. Topical use is typically in a gel that consists of 5% Dapsone which is administered to treat acne and other skin conditions.

Medications have their side effects and warnings. Before you take Dapsone, you should know how it could affect you. The two more common side effects of Dapsone are vomiting and an upset stomach. If either of them is severe, you should visit a doctor for immediate help. The side effects that call for immediate action are: sore throat, fever, rash, jaundice (yellowing of the skin/eyes), and strange bruising. If experiencing any, you should find a doctor as quickly as possible.

One of the side effect of Dapsone, also known as „Dapsone syndrome” that occurs rarely causes a hypersensitivity reaction manifesting with fever, hepatitis, exfoliative dermatitis, lymphadenopathy and hemolytic anemia. The symptoms usually appear within 3 weeks of starting treatment.

EFFECTS ON THE BLOOD

Hemolysis is the most common side effect of Dapsone. Roughly 20% of patients who are treated with Dapsone will develop hemolysis. This is one reason why Dapsone is no longer used as a primary treatment for malaria in some products. Serious side effects that lead to the death of the patient are rare, but those that do happen generally occur when the Dapsone has altered the formation of white blood cells.

For those people suffering from this skin condition, there is help. While most people have chosen a gluten free diet to make it go away, that is not going to be a quick answer. Dapsone is usually prescribed by doctors to help people suffering from this stop the itch and annoyance. This can help people regain control of their lives and freedom from something that once caused quite a bit of worry. It is effective and works very quickly, giving everyone relief as soon as possible. While you do have to watch out for the side effects, of course, it is still something that can help in tremendous ways.

Finding an answer to your skin condition is possible. While Dapsone has its side effects, like any other medication out there, it is an effective way to treat the skin condition you have. It can help you better control what is wrong and stop the itching once it starts. By doing this, you can avoid dealing with bothersome, unattractive issues that once caused you quite a bit of grief. You should speak to your doctor about Dapsone to figure out if it is something you should be taking.

Dapsone can be found in both topical and oral formulations. Multi-specialty health care company called Allergan produces topical dapsone in a 5% gel formulation sold under the brand name Aczone. In December 2008 they introduced the 5% dapsone gel called Aczone to the prescription market to be used as a topical treatment for moderate to severe acne. Preliminary reports suggest that dapsone gel is a safe and moderately effective in treating acne.