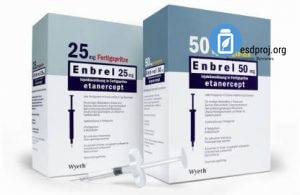 Imagine being covered in bug bites from head to toe, and every single one of them itched at the same time. People who suffer from any form of psoriasis can attest that, untreated, that is exactly what the disease can feel like. Psoriasis is is chronic disorder that affects both the skin and joints of the body.

Red, scaly patches appear on the affected areas, and over time, the patches turn white and flaky. The exact cause of psoriasis is not known, though scientists hypothesize the disease in genetic. Psoriasis treatments pose challenges for doctors since it is a chronic, recurring disease, but new research has uncovered a treatment option that has left nearly a half-million people satisfied and more comfortable with their psoriasis. Enbrel, or etanercept, is a prescription-only, synthetic protein drug that alleviates many painful and frustrating symptoms of psoriasis, and doctors and scientists alike hope it will be the revolutionary drug that those suffering from psoriasis have been hoping for.

Tumor necrosis factor, or TNF, is a protein substance made by the body’s immune system that is similar to hormones and neurotransmitters that allow one cell to communicate with another. Having too much TNF in one’s system can cause many problems, with such diseases as rheumatoid arthritis and psoriasis being among them. Enbrel is a drug that blocks excess TNF that is made by the immune system, thus lessening the chance that a patient will contract psoriasis, or at least help with the disease’s painful symptoms. However, as will all experimental medications, patients should talk to their doctors to see if this drug is right for them considering Embrel side effects which can be harmful to those who already have weak immune systems.

As far as psoriasis treatments go, those who are eligible to use Enbrel have experienced a substantially higher quality of life since beginning the treatment.

Since being approved by the U.S. Food and Drug Administration in 1998, Enbrel prescriptions have caused considerable favorable results in three out of four patients with psoriasis. It helped reduce the scaly appearance of the skin, while acting as an analgesic to take the itchiness away. Patients also felt a decrease in pain and swelling of the affected areas. Enbrel was proven to work fast, with patients seeing noticeable results in as little as eight weeks.

Those taking other pain medications and prescriptions might not be eligible to use Enbrel, as the mixing of the certain chemicals can be very dangerous. Expectant and nursing mothers are also urged not to take Enbrel, as the protein substance can potentially poison a mother’s breast milk.

Enbrel side affects and those of these psoriasis treatments are, as with any other drug, dependent on the patient. Enbrel is an intravenous protein drug, and Enbrel side effects such as itching, redness and swelling usually occurred at the site of the injection. Headaches, dizziness and throat irritation can occur soon after the drug is taken. Since Enbrel lowers the ability of the immune system to fight infections with the blockage of TNF, those prone to disease can become more susceptible to contracting other diseases. If patients begin to feel any of these symptoms, they should immediately stop the psoriasis treatments and talk to their doctors for the next course of action.

When suffering from any kind of disease, patients are likely thankful for any alleviation of the painful symptoms their doctors can provide. For the right candidate with psoriasis, Enbrel can give ease while reducing the unsightly appearance of blotchy redness. And while there is not a definite cure for psoriasis, Enbrel can deliver the next best thing.